Barcelona have managed to mock the vast majority of their own squad in a tweet designed to laud the continued incredible goalscoring heroics of their talisman Lionel Messi.

The Argentine – widely regarded as the best player in the world – is showing no signs of slowing up despite approaching the age of 32.

Messi had a thoroughly impressive 2018/19 campaign, notching 36 goals in 34 LaLiga appearances as Barca secured their 26th league title – and the forward’s 10th for the club.

Messi also clinched the Pichichi Trophy for a joint-record sixth time after finishing the top marksman in Spanish’s top flight once again.

talkSPORT is your home of live football! Here’s what’s coming up on talkSPORT and talkSPORT 2…

For the first time ever, the accolade has been won by a player who has scored 15 goals more than the second-placed player, after Messi’s team-mate Luis Suarez ended the season with 21 goals to his name to finish runner-up in the LaLiga goal standings.

Barcelona took to Twitter to recognise the brilliance of their star man, tweeting a Cann table showcasing just how many goals he has scored this season.

However in doing so, they inadvertently took aim at the rest of the squad – hinting at a shortage of goals from elsewhere.

Messi’s goals made up 40 per cent of the team’s overall tally, while the No10 also contributed an impressive 13 assists in the league alone this term.


How much does golf-crazy Bale earn compared to Tiger Woods, Rory McIlroy and co?

Fans on social media were far from impressed with the tweet, with one fan responding: “You do realise you trolled half of your own team, right?”

“This is sad,” replied another.

While another wrote: “Mugging off your whole squad.” 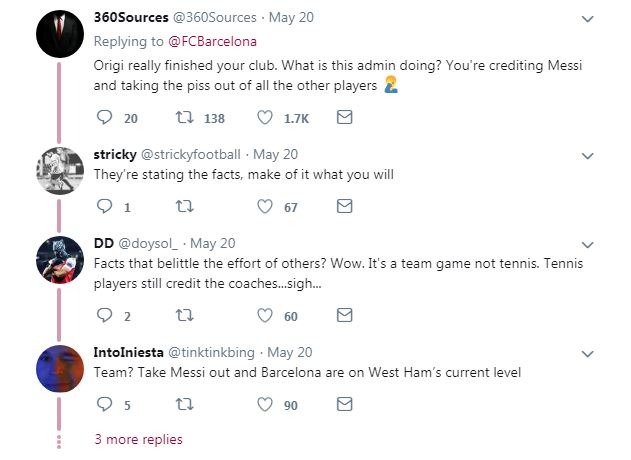 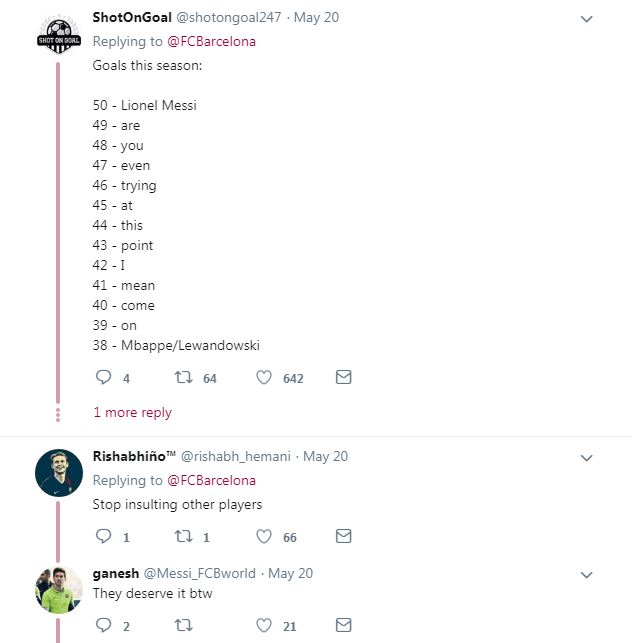 The Barca skipper also looks on course to claim the European Golden Shoe for 2018/19.

Messi is bidding to become the first player to ever claim the prestigious gong for a third straight season.

The Catalan giants face Valencia on Saturday evening in the Copa del Rey final as they aim for a fifth successive win in the competition.

Watch out for Williams –…

Taylor to meet Persoon in…

Woods to make return at…

Froome to leave Ineos at…