Edinson Cavani welcomed the return of fans back to the Premier League with a brilliant 40-yard lobbed goal, but Manchester United were unable to mark the occasion with a victory as relegated Fulham came back to draw at Old Trafford

Aside from a handful of games at a lucky few clubs in December, supporters have been absent from top-flight league football since 9 March 2020.

No supporters have seen a goal at Old Trafford since Scott McTominay’s inspired second in United’s Manchester derby win over City the day before.

There were only 10,000 present to see Cavani’s inspired effort, but what a noise they made as the Uruguayan strode onto a long ball downfield from David de Gea, which VAR felt touched Bruno Fernandes on the way through, before lifting the ball over Alphonso Areola with a perfectly executed finish that floated into the net.

For a long time it looked like being the winner, until Joe Bryan was allowed to ghost in at the far post unchallenged to convert Bobby Decordova-Reid’s deep cross from the right. 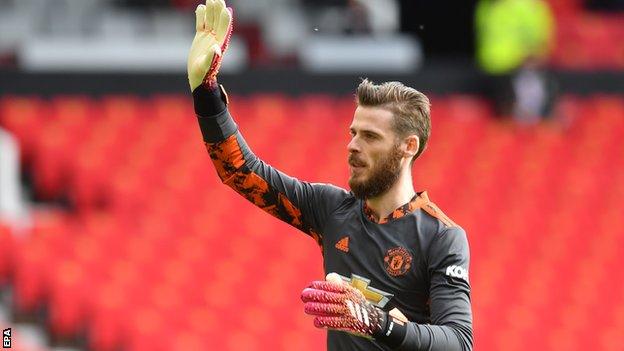 After Alisson’s amazing winner for Liverpool on Sunday, there was genuine debate around whether De Gea made another telling contribution by a goalkeeper to his team’s offensive effort.

TV replays indicated Fernandes failed to get a touch as he attempted to flick De Gea’s pass through to Cavani. But if that was correct, Cavani should have been ruled offside by VAR.

De Gea’s selection was interesting in itself.

The Spain keeper has lost his place to Dean Henderson in recent weeks, but Henderson was at fault for at least one of Liverpool’s four goals in their win over United six days previously, so it was not completely clear whether De Gea had got his place back or was being granted a farewell appearance after 10 years of largely outstanding service.

Both scenarios have their complications. For Henderson, another season as back up is unlikely to appeal given his England aspirations, whilst De Gea is one of the Premier League’s highest-paid players. Finding a club to match that salary, let alone pay a transfer fee, is not going to be easy.

Until Bryan’s goal, De Gea did not have much to do against the top-flight’s second-worst attack. He did make saves to deny Ademola Lookman and Fabio Carvalho and had little chance of keeping Bryan’s equaliser out.

Djokovic fights back to win…