Alex Hales capitalised on a Ben Stokes dropped catch to lead Trent Rockets to a thrilling, unlikely two-wicket victory over Northern Superchargers in the men’s Hundred.

Chasing 133, the Rockets needed 42 from 24 balls with three wickets left when Stokes dropped Hales on the boundary edge – the ball also going for six.

To add to the drama, Hales had previously only managed a single from that delivery before Stokes insisted it was re-bowled because of a pitch invader.

Until then, Hales, who finished 40 not out from 34 balls, had struggled to lay bat on ball but thumped David Willey for a towering six to seal the win with six balls to spare, sending a large Trent Bridge crowd wild.

How the breathtaking finale unfolded:

Hales the hero at Trent Bridge 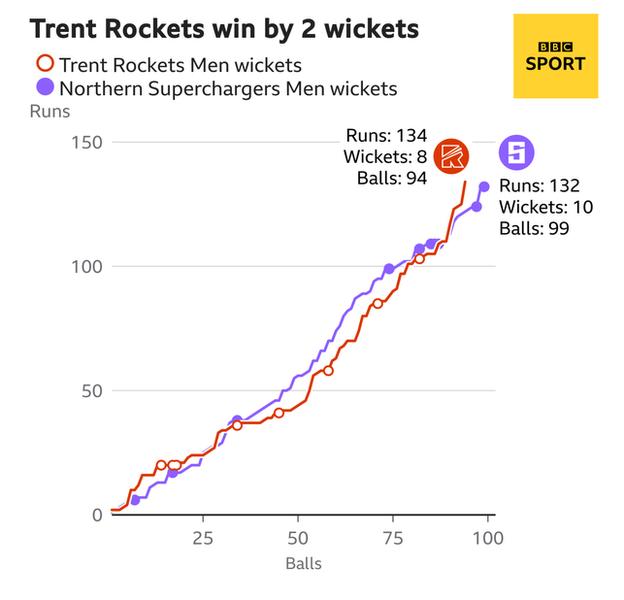 Stokes is usually one of the best fielders in the country – possibly the world – and Hales even said afterwards: “I don’t think I’ve ever seen Ben Stokes drop a catch.”

Drop it he did, and it proved pivotal.

The Rockets had earlier been given just a 2% chance of winning by the win predictor, after Adil Rashid and the Superchargers’ spinners reduced them to 85-7.

Hales, who scored only 16 from his first 25 balls as he failed to connect again and again, is one of the most talked-about players in the English game.

He is a world-class, destructive batter but England have left him out for their team for almost two years because of off-field issues.

The 32-year-old’s matchwinning hit almost cleared the stand and as the crowd celebrated, he wildly punched the air before roaring in delight.

“I had to just hang in there,” Hales said. “I couldn’t middle it at any point.”

Carter the unlikely companion after Rockets hit by Covid-19

Hales had the most unlikely companion in Carter.

The tall, well-built right-hander looks a little awkward at the crease and has no batting pedigree, averaging 8.50 from 10 Twenty20 innings.

He was only playing in this game because Covid-19 rules ruled out Steven Mullaney but hit two international bowlers for crucial boundaries at the finish.

“He does not get fazed,” said Harry Gurney, Carter’s former team-mate at Nottinghamshire.

“I remember his very first game. He was thrown in for a T20. He is the most chilled-out customer you could possibly imagine.”

“Carts is one of those guys whatever I say it will go in one ear and out the other,” he joked, before adding that his team-mate played a “gem of an innings”.

While not quite on the level of the 2016 T20 World Cup final defeat, this will probably rank as one of the most difficult losses for Stokes to swallow.

Normally any team’s superstar, today he only made five with the bat and was as culpable as any at the end with the drop, plus a wide and a full toss which Hales hit for six in his final set of five balls.

His side have been beaten in both of their games, having also lost a tight game against Welsh Fire on Saturday.

Having struggled in their batting innings, bowled out for 132 in 99 balls, Rashid swung the game in their favour with a magical opening spell, during which he dismissed his England team-mates Dawid Malan and Joe Root for ducks in consecutive deliveries – the England skipper out first ball.

Root and Stokes now leave The Hundred for England Test duty and the Superchargers need to find a new captain.

How Antonios resilience took him…

Wenger ready to gamble on…