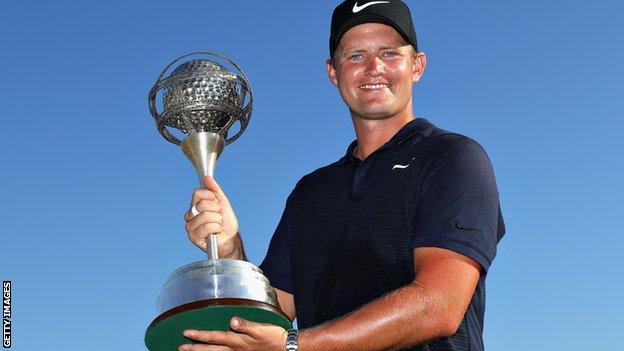 For Britain’s leading golfers there is a familiar route taken across the Atlantic to test their talents on the strongest and most lucrative circuit in the world.

England’s Tom Lewis is the latest to commit to America as he searches for a breakthrough that would, at last, allow him to fulfil massive potential.

Despite flashes of genuine quality, the 29-year-old has still to fully realise his spectacular early promise. It helped him lead the 2011 Open at Royal St George’s as the first amateur to shoot 65 in the Championship’s history.

Since then, Lewis – who was named after Tom Watson, with whom he played during that famous round at Sandwich – has won twice on the European Tour without becoming the force that was anticipated.

Now he has concluded he must fully commit to the PGA Tour to find out the full extent of his talents. This week Lewis plays the Bermuda Championship with his mind made up that the US circuit should be his main priority.

“Honestly, I always think things happen for a reason,” Lewis told BBC Sport. “I got very lucky last year by winning one tournament out of one and that gave me my status.”

But he believes he has failed to make the most of the opportunity because he was simultaneously trying to make progress on the European Tour. “At the end of last year I didn’t play in enough PGA Tour events,” Lewis said.

“I came back to try to secure myself in the Race to Dubai and halfway through the year I kind of regretted that,” Lewis said before adding: “I told myself that if I got a second chance at it, I wouldn’t take it for granted.”

Another opportunity on the PGA Tour has arrived because of his second-placed finish at the World Golf Championships event in Memphis at the beginning of August.

Weekend rounds of 61 and 66 helped the Englishman finish joint second in a star-studded field. That performance helped Lewis finish 124th in the PGA Tour standings from just 12 events and this status provides starts like Bermuda and the next stop in Houston.

But the following week will be spent resting in Miami for surely the most frustrating interval imaginable because it coincides with the rescheduled Masters. It is the one major he has yet to play.

And Lewis came tantalisingly close. Finishing in a share of sixth place at the 2019 season ending DP World Tour Championship, he climbed to 53 in the world which was just three places shy of earning an Augusta invitation.

“I just laugh about it now, what can you do?” he smiled. “Back then I probably cried about it. I just wonder how old am I going to be when I make it.

“Just playing in the Masters would be a great experience, not many people can say that they’ve done that. But it’s not enough for me just turning up and saying I’ve been there.

“I’ve proved I can compete at the top level. Take the WGC (in Memphis this summer) which was one of the strongest fields in the world. I was three over after two days and somehow nearly won the tournament.”

That performance illustrated perfectly Lewis’ strengths and weaknesses. Too often he makes slow starts which negate his prowess at the sharp end of tournaments.

“I’m very strong at the weekends,” he said. “I think I tend to try a little bit too hard on Thursdays and Fridays.

“I leave myself a little bit too much ground to make up, but then I relax and I can shoot some low scores. Not every player can go low, but I feel I can and that’s a good thing to have.”

Ranked 66 in the world, Lewis is seeking the strong finish to the year that would secure an invitation to the 2021 Masters. “It’s going to be difficult,” he admitted.

“But if I play well, get a win, and find myself in the top 50 by the end of the year I can prepare for April and hopefully we’ll find ourselves with more crowds and it would be an amazing experience.

“I’ll be 30 by then and I still haven’t played in the Masters, I’ve been around for ever, I feel like.”

Lewis has endured a far from straightforward career trajectory despite winning the Portugal Masters within weeks of turning pro. By 2018 he was out of the world’s top 400 and worrying about his future.

“At that point in my life I was obviously pretty low and thought it’s not meant to be,” Lewis said.

But in that desperate time, playing the Challenge Tour, he found a way to ease pressure on himself. He matured as a player becoming less prone to being derailed by untimely errors.

“I started to understand how to score,” he said. Lewis was sixth at the 2018 Czech Masters and then won the Bridgestone event on the Challenge Tour.

He was third the following week and then won the Portugal Masters, seven years on from his inaugural success in the same event. Then he was 10th at the Alfred Dunhill Links Championship in Scotland, a result that meant as much as his victory.

“The most important thing was not the win but getting a top-10 the week after because great players always follow a win with a big week,” he said.

Lewis is not turning his back on the continental circuit and his prime goal is to play for Europe in the Ryder Cup. To do that he has to improve by competing against the best golfers in the world without compromise.

Seeking improvement on the greens, he is working with putting guru Brad Faxon and knows that statistically he is competitive in almost all parts of the game.

“I’m in the top half in everything except one area which is between 10 and 20 yards from the pin,” Lewis said.

“If I can improve that a little bit and continue the process I’ve got with my putting and long game, which is becoming the strongest it ever has, I’m really not far away from doing some really great things.”