A well-placed insult in the corner was key as the love poured down from the steep seats at Manchester Arena.

The unshakable rivals asked questions of one another and solved puzzles in the ring, resulting in desperate moments where respect was briefly replaced with low blows.

When all was said and done boxing had a new breakout star and Tszyu’s wife was left thanking the man in his corner. 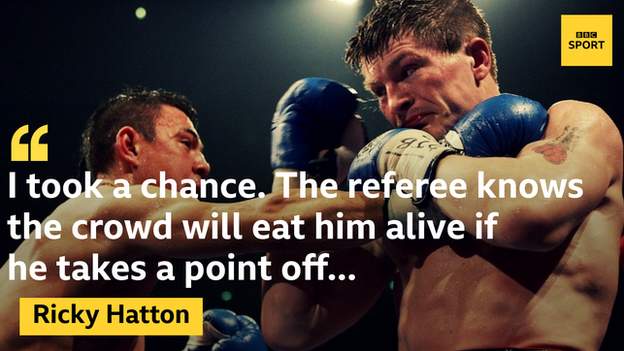 “The newspapers said I didn’t have half a chance,” says Hatton as he begins to watch the 5 June 2005 fight back with Mike Costello and Steve Bunce for the BBC Sounds Greatest Fights podcast.

“Walking to the ring I was trying to have confidence in myself and what we had worked on. Under such pressure, it’s just holding it together.”

In Hatton’s eight years as a professional Tszyu had never lost. The Russian-born Australian, who started boxing to burn energy because he was hyperactive as a child, had held countless world titles and brought the IBF super-lightweight belt into the contest.

For weeks Hatton – 26 at the time – had taken to running at 2am in order to align his body clock with the first bell.

Tszyu – nine years older at 35 – decided against changing his routine. He said he could handle one late night but the relentless brawl that followed must have felt like a nightmare.

“I’ll be honest, I used to get really nervous for fighters I liked,” says Bunce. “That last 30 minutes when Blue Moon played and Ricky started his walk in was one of those where you’re taking in big gulps. There was bedlam in the place, it was off the scale.”

Hatton was instructed to get his head on Tszyu’s chest and turn the fight into an up-close, gutsy battle. Crucially, he was told to only move close after throwing a jab to ensure he did not simply walk on to Tszyu’s fabled right hand.

“I set off like a greyhound out of the traps in the first two rounds,” recalls Hatton. “When he had his good few rounds I knew he’d need a rest so then I’d raise it for the next two. That’s what being a good seasoned pro and a 12-round fighter is, it’s knowing when to put your foot on the gas and when to let him drain himself.”

Harsh words and a risky shot

In row one at ringside, Australian actor Russell Crowe is in town to support Tszyu. A few seats away chef Gordon Ramsay is barely blinking as he fixes on Hatton’s attempts to constantly deny space and Tszyu’s efforts to punch his way to brief freedom.

Hatton will not let is rival rest but describes taking even glancing right hands from Tszyu as “horrendous”. By the end of the sixth he fears the champion has found a groove.

“He was hurting me,” says Hatton. “A couple of times he caught me. I didn’t buckle but stiffened.

“Billy Graham was saying to me ‘Ricky, I don’t mind if you lose some of these rounds because he won’t be able to maintain this.'”

By the ninth – and a couple of Tszyu low blows later – Hatton begins to feel a hint of weakness in his opponent in the form of deeper breaths and softer punches. He made a quick and ruthless decision.

“I took a chance and thought if I hit him low, surely the referee’s not going to take a point off me when he’s been hitting me low a few times,” says Hatton.

“The referee knows the crowd will eat him alive if he takes a point off. Tszyu was dwindling but that shot to the knackers might have sent him over the edge.”

Bunce watches the footage of Tszyu recovering in the ring and replies: “That is the most perfect, illegal left hook thrown in a British ring.”

Hatton returns to his stool shattered and informs his team he has nothing left with three rounds remaining.

“Billy said ‘I don’t want to hear that from you, we knew we would be in this position one day and if you’re not man enough to take advantage you’re not the fighter we’ve been telling everyone you was,'” says Hatton.

“He knew if he insulted me he got the best out of me.”

Tears on top of Everest

Over 17,000 fans chant “Ricky, Ricky, Ricky”. Deep in the 10th, Tszyu drives home that feared right hand and stiffens Hatton’s legs. To this day, Hatton believes it was a champion’s final throw of the dice.

“He’s a bit like an MFI wardrobe now, all over the place,” says Hatton as he watches the 11th round again.

“I think his trainer thought ‘if we haven’t got him with that right hand in the 10th round, we aren’t getting this fella tonight.'”

Tszyu sits dazed in his corner with just three minutes left. All three ringside judges have him behind.

Deafening roars sweep down to the ring as the fight is waved off. Tszyu’s trainer Johnny Lewis felt one more round was too much to ask. When Lewis landed back in Sydney, Tszyu’s wife thanked him for his decision.

Hatton, a world champion for the first time, is on his back fighting tears.

“That is Mount Everest,” he says. “Once you retire, it’s hard to replace that feeling. It’s probably the reason why I struggled with retirement.

“It was a dream. People tell me it was their best night in Manchester. It doesn’t matter what money you have, that is worth more. It’s worth everything.”

Tszyu never fought again. Hatton would go on to light up Las Vegas.

It is fitting he built a legacy after battling so bravely in the early hours of a momentous Manchester morning.

A disaster – The night…

I was a product, not…