Latest News
Home /Taylor wants Pac and how much could Joshua and Fury make? 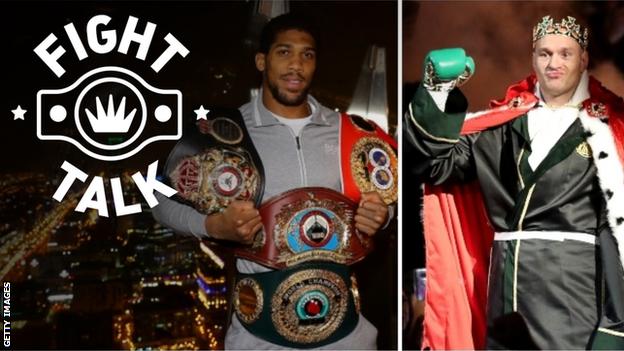 In this week’s Fight Talk we look at reports Tyson Fury and Anthony Joshua will earn £53m apiece when – or is it still if? – they meet in their blockbuster fight this summer.

Elsewhere, we preview a huge night for Scot Josh Taylor in Las Vegas on Saturday, reflect on Joshua Buatsi’s performance last weekend, and find out how a football row was settled in a makeshift boxing ring.

‘It’s all about the money’

It is perhaps the most drawn-out fight announcement of all time, but the all-British heavyweight clash between Fury and Joshua seems to be inching closer.

On Monday we learned Deontay Wilder could face Fury first after a judge ruled the American has a contractual right to a third bout with the Briton.

Just 24 hours earlier, WBC champion Fury seemed thrilled to tell us he had finalised a deal to face Joshua.

One reason Wilder might gently move aside for a while is money. In short, there is a lot of it to be made if Joshua meets Fury. And we do mean a lot.

That £53m-a-man sum is before pay-per-view revenues are added in. So they could earn double that amount. The figures have left some fans in disbelief…

And to many, the fight not being in Britain is more of an issue than the money… 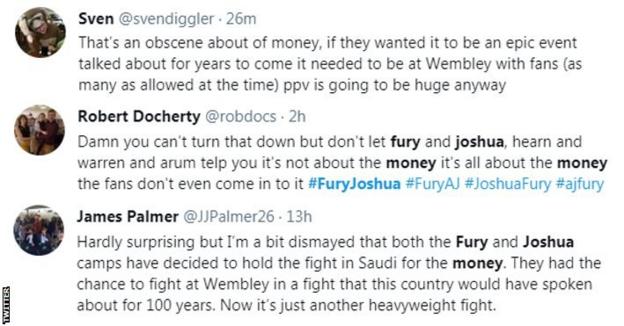 Taylor wants all the belts – then Pacquaio

The winner of Fury-Joshua will hold all of the major world titles in the heavyweight division, but Josh Taylor could make sure that person isn’t Britain’s first undisputed champion in the four-belt era.

Scotland’s Taylor, who holds the WBA and IBF super-lightweight titles, will take on WBC and WBO champion Jose Carlos Ramirez in Las Vegas on Saturday.

‘The Tartan Tornado’ won the IBF strap in just his 15th fight, beating Ivan Baranchyk in May 2019, and added the WBA title by beating Regis Prograis five months later.

In American Ramirez he faces a man who has won all 26 pro fights, but Taylor is ready to rule the 140lb division…

Victory would make Taylor one of the hottest properties in world boxing – but where would the 30-year-old look next?

They say ‘never meet your heroes’, but what about fighting them instead? Taylor would love to face 42-year-old Filipino legend Manny Pacquiao, a man he named his late dog after.

Speaking to The Sun,external-link Taylor said: “Manny is a hero of mine so when we named the dog it came about naturally, I could never have dreamed back then of fighting him but I would still love to now, 100%.

“As soon as that bell rang it would be down to business, even though he is an idol of mine and he isn’t as young as he used to be. He is still a dangerous top-level fighter so I would have to be ruthless.”

Elsewhere, Joshua Buatsi is a man who could one day reach the heights of Fury, Joshua or Taylor

The 28-year-old 2016 Olympic gold medallist notched up his 14th win as a professional by knocking out Frenchman Blenda dos Santos in Manchester on Saturday.

It was Buatsi’s first outing under trainer Virgil Hunter, who oversaw the career of former pound-for-pound super-middleweight king Andre Ward.

Buatsi’s unquestionable talent, under the tutelage of Hunter, has ex-fighters and trainers excited…

For the thousands in attendance and the millions watching around the world… football fans, are you ready?

So how did the duo resolve the little spat? They created a makeshift ring using barrier tape, placed classroom chairs in opposing corners, and donned the boxing gloves, obviously…

We even had former Chelsea and Manchester United striker Romelu Lukaku doing his best impression (well, we assume it was his best) of master of ceremonies Michael Buffer.

And it may well have impressed Buffer, who revealed this week he was a football fan. Kind of.

Goaltender? We appreciate your enthusiasm, so we will let it slide.

Djokovic fights back to win…